The basic foundations of Lean can be traced to Benjamin Franklin’s works. In one of his publications, he touched on the importance of time and reducing cost. Furthermore, he gave some piece of advice on how people carry goods or inventory.

Frederick Winslow Taylor in his 1911 publication, ‘Principles of Scientific Management’ introduced the concept of standardisation. He opined that superior methods should replace existing ones. Besides this, the new method should be the standard for the whole organisation. Taylor’s ideas birthed the beginning of process improvement.

Lean manufacturing began with Henry Ford in the 1900s. He was the first person to truly integrate an entire production process. Ford lined up fabrication steps using the concepts of work and interchangeable parts. He called this ‘Flow’ production (1913). However, Ford’s system had a problem. His system could not produce variety of parts. All the Model-T chassis produced before 1926 were limited to one colour and specification.

In the 1930s, Kiichiro Toyoda, Taiichi Ohno, and others at Toyota started looking at Ford’s situation. While Ford was producing 8,000 vehicles per day, Toyota had produced just 2,500 vehicles in 13 years.

Toyota had plans to scale up production, but they didn’t have enough resources at that time. After a series of observations and thinking, people at Toyota came up with different concepts. Some of the concepts include:

In 2008 Toyota became the world’s largest automotive manufacturer in terms of overall sales. Also, as of 2017, Toyota is the world’s second-largest auto manufacturer. Toyota’s continued success has paved way for further research on Lean manufacturing.

History of Six Sigma: How it started with Motorola

Losing market share in the early 1980s was ironically the turning point for Motorola. Motorola’s President and CEO Bob Galvin had enough issues to deal with. At an executive meeting, he asked the question, ‘What’s wrong with our company?’ As usual, he got the seemingly right answers. Some of the answers were: ‘the Japanese’, ‘the weak research and development’, ‘the economy’, etc.

While this was going on, a lone voice came from the back of the room saying, ‘our quality stinks!’ That voice was Art Sundry’s. He was the sales manager for Motorola at that time. People thought he would be fired for making such a statement. However, that was not the case.

Motorola had a choice to make. It could continue to lose market share or make an unprecedented breakthrough. To this end, Motorola began its search for ways to improve its quality. Bill Smith and Mikel Harry pioneered the work that focused on improving processes and resolving defects. Their discoveries laid the foundation for what we call Six Sigma today.

In January 1996, General Electric’s (GE) Chairman, Jack Welch launched the Six Sigma quality initiative. He was told about the profound effect of Six Sigma. Although skeptical at first, he initiated a campaign called ‘the GE Way’. GE was able to save more than  $12 billion with Six Sigma in the five years after adoption and implementation.

How to get certified

Getting certified requires that you attend training and then sit the IASSC exam. Harrybaker Training Institute is accredited by IASSC to conduct Lean Six Sigma training and exam.

As a combination of two concepts, the history of Lean Six Sigma can be traced back to the early 2000s. The concept was used in a book titled ‘Leaning into Six Sigma: The Path to integration of Lean Enterprise and Six Sigma’ by Barbara Wheat and others.

Today, most organisations around the world are adopting and implementing Lean Six Sigma. As a matter of fact, different bodies now certify professionals in Lean Six Sigma. 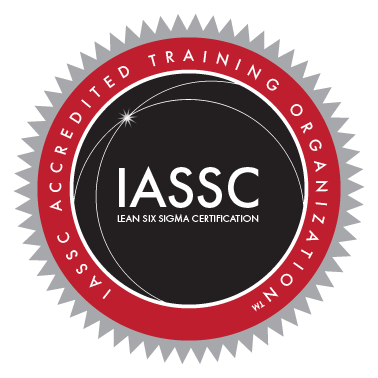